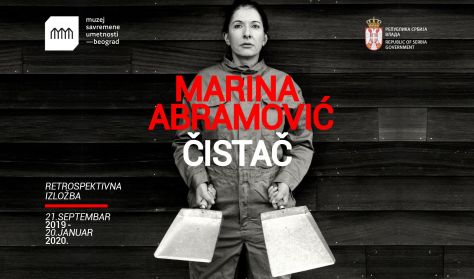 Conceived in close collaboration with the artist herself, the exhibition The Cleaner is the first major European retrospective of Marina Abramović. The exhibition made its debut in 2017 at the Moderna Museet (Stockholm, Sweden), and has subsequently travelled to the Louisiana Museum of Modern Art (Humlebæk, Denmark), Henie Onstad Kunstsenter (Oslo, Norway), Bundeskunsthalle (Bonn, Germany), Fondazione Palazzo Strozzi (Florence, Italy) and the Centre of Contemporary Art “Znaki Czasu” (Toruń, Poland). The Belgrade exhibition is the last stop on this tour, and it holds unique significance as it represents theartist’s return to her place of birth, where her career began, and where she last had a solo exhibition in 1975, at the Salon of the Museum of Contemporary Art.

The exhibition chronologically reviews all of the phases of the artist’s multifaceted fifty-year long career. This begins with her early paintings (1960-1969) and conceptual works (1970-1972), followed by her solo performances (1973-1975) and works created with former professional and personal partner Ulay (1976-1988), a period in which she gained international acclaim. Finally, the artist’s solo career from 1991 to 2017, marks her establishment as one of the greatest artists of today. The exhibition showcases over 120 artworks, including paintings, drawings, objects, photographs, audio works, video installations, films, scenography, re-performances and archival materials. Among the works exhibited are anthological works of performance art (Rhythms, 1973-1974; Lips of Thomas, 1975; Relatonal works, 1976-1977; Nightsea Crossing, 1982-1986), as well as representative works from Abramović’s recent body of work (Balkan Baroque, 1997; The Artist is Present, 2010).

The live segment of the exhibition is presented through the re-performances of Marina Abramović’s historical performances, which will be performed daily by local and international performers. In addition, the exhibition will include works that call for the active participation of the audience.

As part of the exhibition, Marina Abramović will hold a public lecture, and a Master Class for young artists.

The accompanying programme of  The Cleaner includes film screenings, lectures about performance art and guided tours through the exhibition.

Marina Abramović (Belgrade, 1946) is one of the greatest performing artists and is the only representative of the 1970s generation of radical performers that is still active in the field of performance art. Throughout her career, Abramović has constantly challenged the boundaries of performance art, experimenting with different forms and genres like body art, relational performance, long-durational performance, autobiographical performance, participatory performance and re-performance. Her performances have relentlessly tested the limits of the body’s physical and psychological endurance, social stereotypes and taboos, cultural and gender identity, all while producing a strong affective impact on audiences. These performances are complex structures of meaning, formed on the intertwining between the literal and the symbolic, the material and the spiritual, the physical and the mental, the intimate and the public, the repetitive and the changing, the actual and the virtual.

For Abramović, performance art is the art of transformation that develops through the exchange of energy between the performer and the audience. It is the art of “cleaning” that has the capacity to fundamentally change how one experiences the self, others and of the collective, as well as how one relates to life itself. The artist’s oeuvre indicates a constant search for methods and techniques that release the energy of humans, objects and actions.

The exhibition is locally organized by the Museum of Contemporary Art, Belgrade

The exhibition is produced by Moderna Museet, Stockholm, in collaboration with Louisiana Museum of Modern Art, Humlebæk and Bundeskunsthalle, Bonn

Curated by Lena Essling (Moderna Museet), with Tine Colstrup (Louisiana Museum of Modern Art) and Susanne Kleine (Bundeskunsthalle).*By purchasing this ticket you are giving consent for usage of your image in photo and video materials recorded in MoCAB during your visit to The Cleaner exhibition.