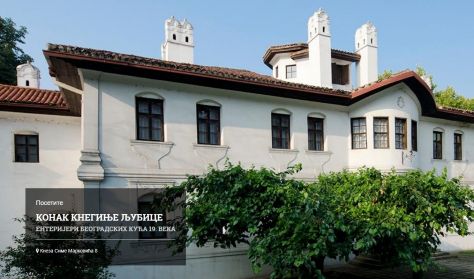 The Residence of Princess Ljubica is one of a few buildings which had survived from the first reign of Prince Miloš Obrenović. It was built between 1829 and 1831, in accordance with the plan designed by Hadži Nikola Živković’s and under his supervision.  more

The Residence of Princess Ljubica is one of a few buildings which had survived from the first reign of Prince Miloš Obrenović. It was built between 1829 and 1831, in accordance with the plan designed by Hadži Nikola Živković’s and under his supervision. Hadži Nikola Živković was the Prince’s official architect. The Residence’s function had been intended as a luxurious court of the Serbian ruling dynasty, i.e. the Obrenović dynasty. However, as it was located in the immediate vicinity of the Ottoman Turks, Prince Miloš stayed there only occasionally. The Residence’s function had served its original purpose during the first reign of Prince Mihailo (1839–42), when it was used as the Prince's residence.

After the expulsion of the Obrenović dynasty from Serbia (1842), and over the next 130 years, the building had been repeatedly adapted to house various state institutions. In the 1970s, Belgrade city authorities decided to repurpose it as a museum, in accordance with its historical, artistic and heritage value. After a restoration and reconstruction in 1980, Princess Ljubica’s Residence became a part of Belgrade City Museum, while the permanent exhibition of Belgrade City Museum “The Interiors of 19th-Century Homes in Belgrade” was set up in September 1980.

THE INTERIORS OF 19TH-CENTURY HOMES IN BELGRADE

The exhibition includes a representative selection of fine and applied art objects from the collections of Belgrade City Museum. The objects date from the 19th century and are products of both Western European, and domestic artistic and industrial manufacture. The objects belonged to the members of the ruling (Obrenović) dynasty and prominent bourgeois families. The permanent exhibition illustrates the emergence and development of high bourgeois culture, as well as, the way of life and the habitation style in the 19th-century Belgrade. By putting on display a vide variety of objects, Princess Ljubica’s Residence takes visitors through a time travel to old bourgeois homes, introducing them to the material and spiritual life of Belgrade's citizens in the past.

We invite you to take a look at the objects displayed in Princess Ljubica’s Residence.

You can view other objects owned by Belgrade City Museum’s other collections and institutions in our digital depot.

Ticket: 200 RSD
Concessions (pupils, students, job seekers and retirees): 100 RSD
Groups: On every 10 visitors, a group gets two free tickets. This does not refers to concessions.
Free of charge: every last Saturday in a month, children under 7 years, disabled visitors with escort, MDS, ICOM, ISIC, and Euro26 members.

Warning! The basket time limit is about to expire!